It’s chilly out, even in the hallway, so the proctor promises to let us in early, at 9:30am. I grasp the sheet of paper we all had to sign and shuffle from one foot to the other, trying to keep warm. The paper too, I periodically switch from my left hand to my right and back again, alternating which hand gets to stay in a warm pocket. A handful of people wait with me. The blonde-haired, blue-eyed girl crouching next to the door is well-bundled up in patterned hat, scarf and mittens. A woman who looks Korean stands to my right, with shoulder length hair and big eyes. I think to myself that her mannerisms don’t quite seem Korean, but I’m unable to identify exactly how. A man with darker tone skin who didn’t seem to speak or read any Korean asks the proctor a lot of questions. Shortly after he leaves to go to the bathroom, we are told we can enter.

Inside the test center, there are cubbies for our belongings and a table where we can place our drinks and snacks. I pull out my plastic water bottle and berate myself for not bringing any snacks; everyone else has granola bars or dried fruit or snack cakes. Finally, I nervously pull out my IDs – my foreign residence card, Fulbright card and Colorado driver’s license – hoping this will suffice since I foolishly forgot my passport. But it proves to be no problem, and after being scanned with a wand, confirming my identity, and having an awkward picture taken, I’m off to my computer, framed by a flimsy cardboard barrier to prevent cheating. I sit down to confirm my identity once more, and start, trying not to let myself become distracted or intimidated by the flurry of clicking and typing around me.

I don’t see much about the GRE on ETA blogs, but it seems like the majority of ETAs take the GRE, MCAT, LSAT or some other test during their grant year(s). Standardized tests are the worst, and taking the GRE in another country adds another layer of uncertainty. For the rest of this post, I’ll run through the study materials I used.

As an English teacher, you might’ve have guessed that my biggest concern was math. You’d be right, but I was also worried about having been away from college for a year (and feeling like in Korea, I’ve been losing my English). So I tried to balance both subjects. These were my study materials:

ETS Math Review pdf. I started with the free math review provided by ETS. It covered a lot of basics (some too basic for me, some necessary) and has practice questions for each topic.

GMAT Math Flashcards app by Magoosh. This app is for the GMAT, but it reviews the same general topics. The math section of the GMAT is said to be a little more difficult than the GRE, so this seemed safe. Using a flashcard format for math is okay, but can get a little awkward. After all, once you’ve solved a problem, you don’t need to repeat the same one over and over again – you just remember the answer. But this app was useful for remembering formulas and general concepts.

Pocket GRE Math app. While browsing through GRE math apps, this one had decent rankings/reviews, was aesthetically pleasing and clearly laid out. It has a lot of practice questions and explanations, which I found to be more practical than the Magoosh flashcards. There is also an option to take practice tests if you rate the app, but I never tried this function.

Princeton Review Verbal Workout for the GRE, 5th edition, book. I bought this book used from a fellow ETA, without really knowing anything about it, but I ended up very pleased with it. The book is easy to read, offers useful test strategies (essential!) and practice problems that walk you through their strategies up to full-on test questions.

GRE Flashcards app by Magoosh. This app was my primary tool to study vocabulary. It’s easy to incorporate into your life, and I’m almost at a loss now – what am I supposed to do while I’m waiting at the bus stop now? I pushed myself to review with the app whenever I had a free moment, and most of that time ended up being on (or waiting for) public transit.

Magoosh Vocabulary Builder. Another vocab tool from Magoosh, the Vocabulary Builder is like an easy version of the flashcard app. It’s intended to be more of a review, something to quiz yourself, but the format was nice to shake things up and give me a little variety. I only used it on the computer, not as an app.

“GRE Vocabulary 500” list on Memrise. If you don’t already know Memrise, it’s a site that helps you learn vocabulary using memes (if you so choose). I’ve been using it for Korean vocabulary, but I realized late in the game that they also have GRE vocab lists. This list was useful and mixed up the words I was coming across on the Magoosh flashcard app. One annoying quirk is that when a word has multiple definitions listed, or its definition is listed as a phrase, it requires you to put the answer in the exact same order, or it counts your answer as wrong. For example, the answer for “perfunctory” was listed as “obligatory; cursory; automatic.” If you typed “cursory; automatic; obligatory,” the answer would be counted as wrong. I didn’t want to waste energy remembering the exact order of their definitions, so when a word had multiple definitions or a phrase as its definition, I’d write it down in my GRE study notebook (more on this later) and “ignore” the word, removing it from my list. Perhaps there are other lists that get around this quirk. A final benefit to using Memrise is competition! You receive a score based on how much you study (daily, weekly, and all-time). Just seeing and trying to beat my friends’ scores was motivating, although they were probably studying languages, not for the GRE.

ETS GRE website and prompt lists. For the writing section, I just needed to exercise my brain and get in the habit of quickly forming and organizing a response to the GRE prompts. The entire list of possible prompts is actually on the ETS website, giving you endless questions to practice with. I found I was more interested and actually had things to say on the “Issue” questions, but the “Argument” questions were both more boring and easier for me to complete.

Princeton Review Verbal Workout for the GRE, 5th edition, book. There was one chapter on writing. Worth a read, but nothing groundbreaking. They do break down the expectations for each type of question very clearly.

The Official Guide to the GRE, 2nd edition, ebook version. The practice questions were the most useful and I think I ran through all of them. The information itself is just regurgitated from the website and is mind-numbingly boring. The Princeton book was much easier to read. The math review section is unfortunately nearly the same as the free one provided online, which gives you the frustrating feeling that you’ve wasted your money. But there are also two extra practice tests!

GRE Powerprep Software. Two online practice tests, essential if you’re taking the computer-based test. For me it was a discouraging experience. But at least you get a feel for the test!

Sometimes, when you’re taking on something difficult or soul-sucking, you need to treat yourself. Or sometimes you just need something cute or happy-looking to remind you that there’s more to the world than this exam. That’s where these essential products come in:

GRE study notebooks. A notebook is an essential study tool. But why settle for a plain cover? A Gudetama one would be much nicer. You should feel inspired every time you pick up that notebook. Because once you open it, that inspiration will quickly fade.

Quirky pencil case. I couldn’t have chosen anything other than Choo Choo Cat. The remake of Botticelli’s “Birth of Venus” is my personal favorite by far. There’s really nothing more to say. 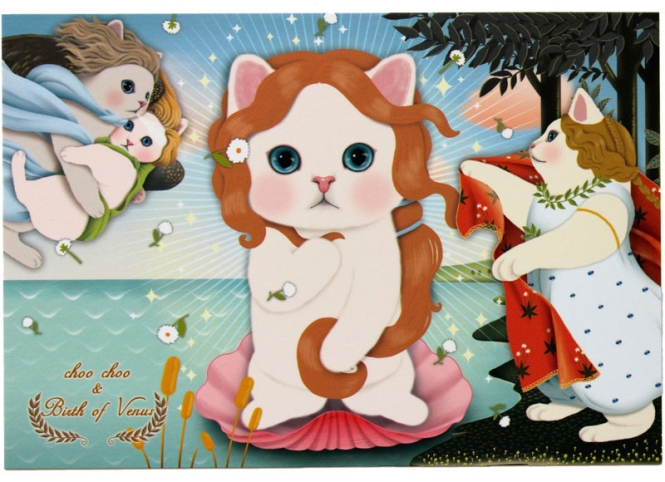 Cool pens. I opted for a set of three erasable pens from Japan. They erase with friction! Serves the dual purpose of decreasing stress as you furiously scrub out that wrong answer and keep your notebook looking pristine.

I do think I approached studying for this standardized test a little more seriously than I would have in the US. Yes, I’m sure that’s partially spurred on by the fact that this is grad school we’re talking about, but I’ve also been influenced by my time in Korea. I’ve taught at two high schools now, and at both my students study for ridiculously long hours, sometimes staying at school as late as 10pm for “self-study.” Seeing my students push themselves so hard every day and take their exams so seriously, surely I could commit myself to studying for a measly two months.

2 thoughts on “Taking the GRE in South Korea”

What I Write About

Plein-air pen and wash on paper

A Post-Grad's Journey to Live, to Love and to Travel

There and Back Again

An (almost) Asian's tale from visits to the homeland as a Fulbright scholar/study abroad student. (The views expressed in this blog do not reflect the views of Fulbright, Fulbright Korea, KAEC, or the ETA Program. They belong solely to me and don't you dare try to steal them.)