The posts I want to write just keep accumulating… usually until I forget about them and move on. In my attempt to cover more topics, I’ve decided to do a few shorter, more picture-heavy posts until I catch up.

Currently the list includes my mom visiting Korea, attending another cousin’s wedding, surviving my first open class, and still trying to figure out where I’ll be next year – but now I know I will be able to stay in a high school! 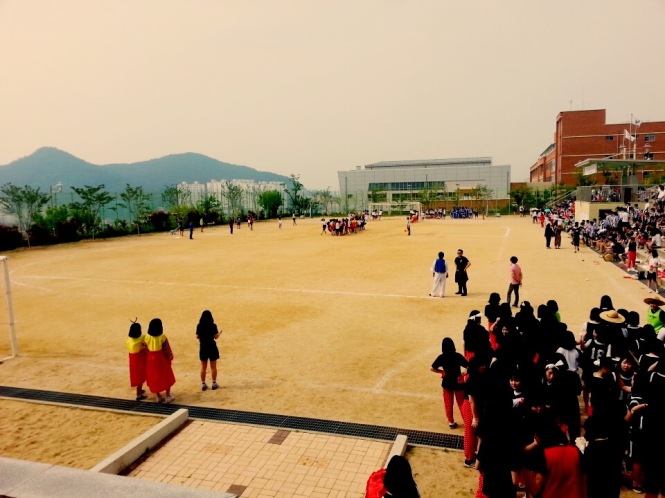 But today’s post is about my school’s spring Sports Day! I was excited to be able to experience another sports day at my school. Unfortunately it was marred by a bout of nausea in the morning, which meant I skipped the morning ceremony (and the principal’s speech – shh!) and didn’t take nearly as many selfies as last time. Spring sports day also (intentionally) fell on Teacher’s Day, which is a real thing in Korea. Yes, we might have a teacher’s appreciation week in America, but people here people actually do things for Teacher’s Day. Like giving us rice cakes and flowers. Our office (aka teachers other than me) received three bouquets of flowers, one of which was rotting away in our office until just recently.

Also, to give teachers a break, sports day and teacher’s day coincided, which meant we didn’t have to teach AND we got to go home early – around 3pm. I hung around with the new Chinese teacher Tantan and different students. Tantan showed up at my office after the morning ceremony,  wearing a super casual T-shirt and bright red pants with stars: part of a “class tee” set lent to her by students. I felt overdressed in my blouse. Fortunately, another student lend me her tee. 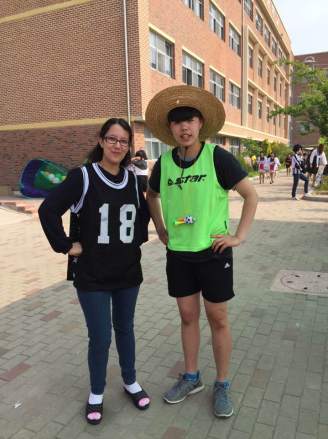 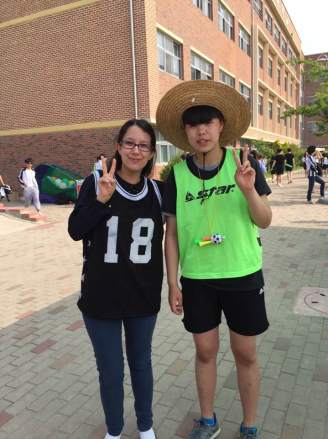 Each homeroom class has their own “class tee,” although it doesn’t have to be just a T-shirt. Outstanding “class tees” designs this time around were hanbok – traditional Korean dresses in class 3-7, tiger shirts in class 1-2, and a boys class wearing traditional-style dresses. Oh, and I was lent a basketball jersey to put over my boring blouse by a girl from class 2-8, and became an honorary member of two classes for the day! 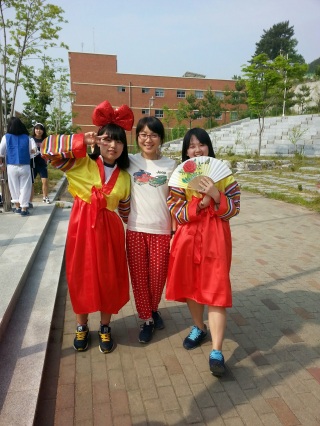 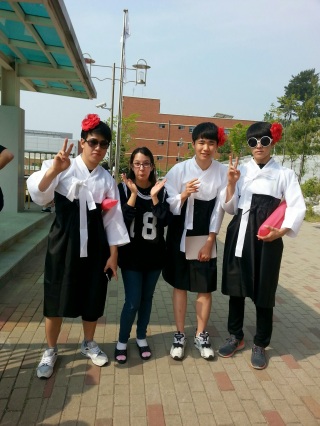 There was a student teacher relay-race again, which I diligently avoided. There are lots of little things you can do to avoid something, like wearing your indoor sandals instead of tennis shoes, or big things like “resting” in your office. Either way, I never heard my name being called and successfully avoided the race. This time instead of having to consume a mystery drink halfway through the race, there were snacks hanging from a string that you had to grab with your mouth. This was something I’d only seen in manga, so I was a little excited to see it in real life. 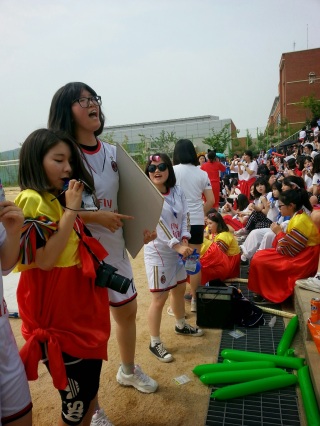 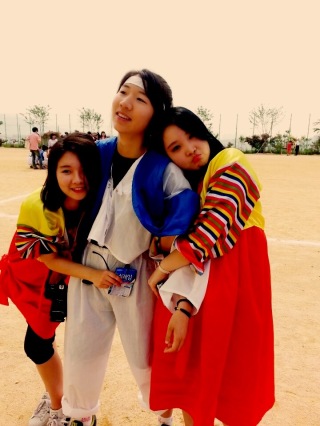 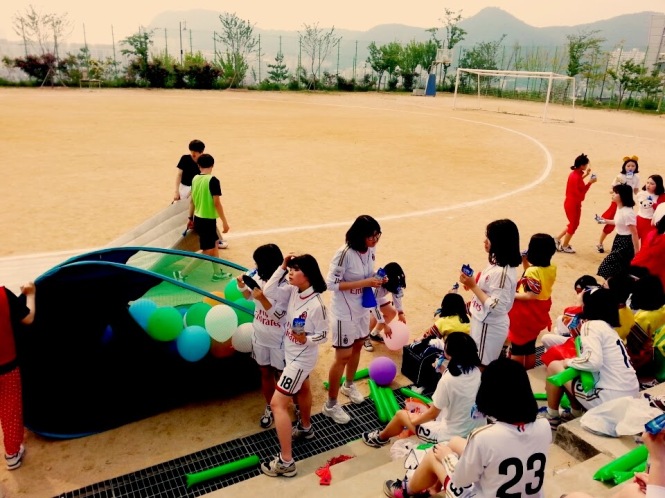 Over the course of the day we were given so much food – which seems ironic, given that it was sports day, but hey, you need energy and nutrition to compete in sports. Or…watch sports…right? A crowd of parents camped out in the shade with boxes and boxes of drinks and snacks, handing them out in bursts. Tantan and I were also given a lot food from students. We received lemonade, sports drinks, candy… One student had a chocolate bar, told me it was melted, and then gave it to me. I’m pretty sure she just wanted to get rid of it. One student even gave Tantan a Mom’s Touch burger! (For those of you who don’t know, Mom’s Touch is chicken chain restaurant with the best chicken burgers.) 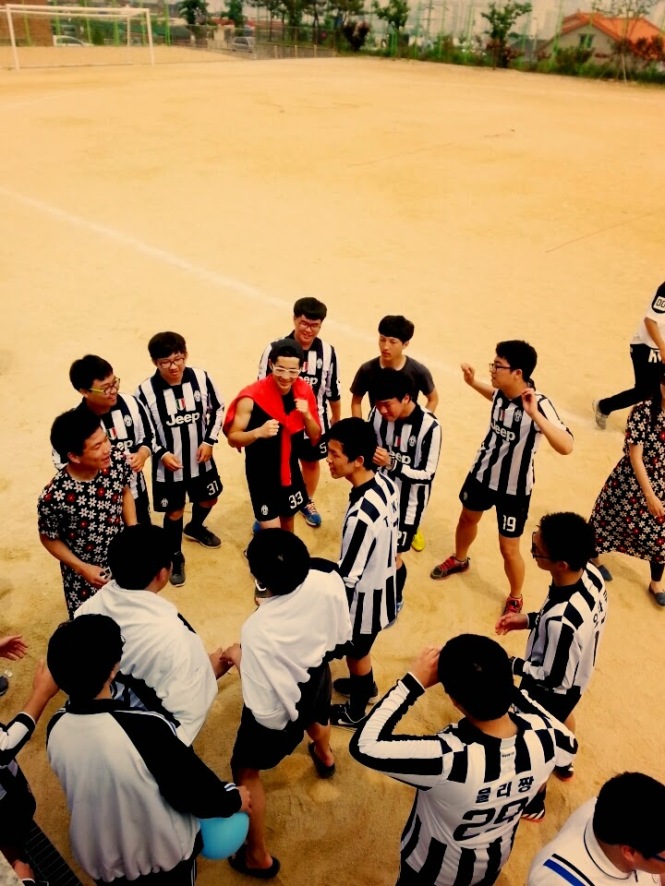 Spontaneous dancing. And from one of the quietest boys in his class.

During the lunch period, once again students showcased their musical talents. A pair of boys from rowdy class 2-2 surprised me with their impressive voices; they were the stars of the show. 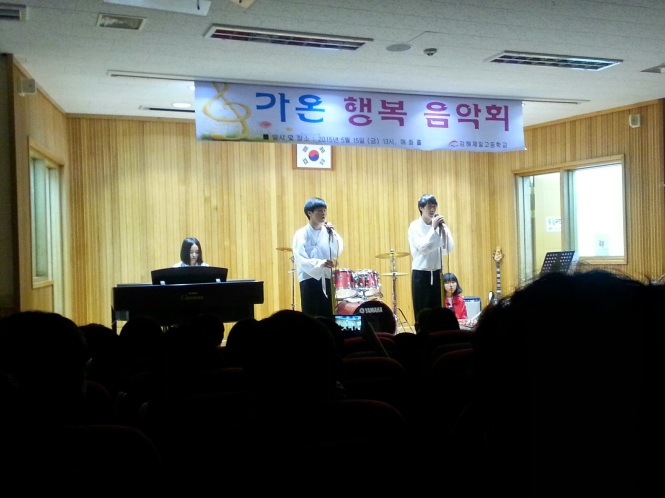 Until I experience it again, the sound of 30+ high school girls chanting their class name is what sports day sounds like to me.

It was a chilly day at the end of November, but most classes wore an extra layer – “class tees” – would could be anything from plain hoodies to a fuzzy pajama set. My favorites were class 2-1’s Hawaiian flower tracksuits and class 1-3’s bright red pajamas speckled with white stars. There were also tiger track suits, camouflage, pink fuzzy pajamas with owls, and multi-colored hoodies. 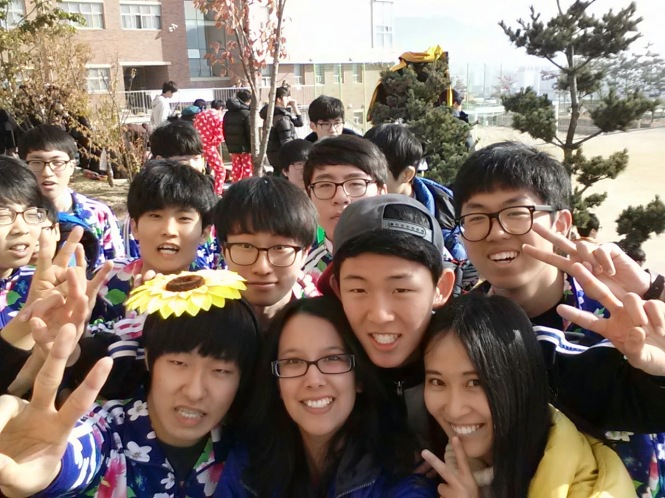 Yuk-ban (class 2-6 or second grade, class 6) donned standard blue hoodies, unremarkable compared to some of the flashier class tees, but they had class spirit like nobody else. They put cheerleaders to shame. All day they chanted and sang at the top of their lungs. At one point I asked one of the girls and she confirmed, yes my throat hurts and my voice is hoarse, but she didn’t stop. Their self-appointed leaders stood in front of the bleachers, wearing a class banner as a cape, holding up a drawing pad with the words to their modified cheers and songs, and dancing about with a megaphone. This class is normally energetic, but I was witnessing an entirely new level. 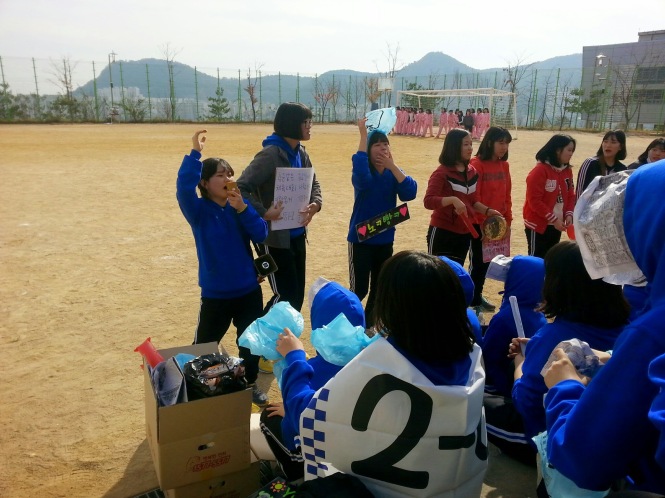 The day progressed from the opening ceremony, with speeches and anthems played, a short taekkyeon/택견 performance (which according to Wikipedia is the ancestor of taekwondo), and various games set up for different homeroom classes to compete. 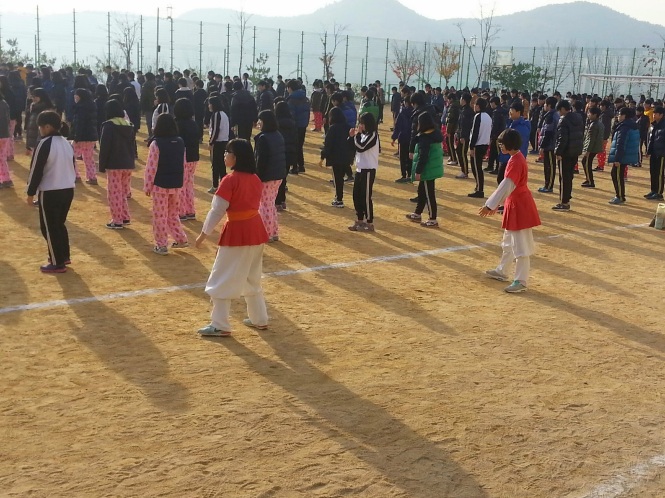 These games included a strategic tug-of-war, 4-legged race, and an obstacle course. All of these were held in a large dirt field. My co-teacher had a hard time explaining the tug-of-war game to me, because it’s more complicated. Instead of one rope, there are five, laid across the field, the same distance apart. The two teams start on opposite ends of the field, and upon starting, run toward the ropes. The goal is to get 3 out of the 5 ropes back to your end of the field. Here’s where strategy comes in. If your team is clearly losing one rope, your team members might decide to give up and join their team members on another rope – outnumbering the opposing team members and ensuring they get the new rope. So it involves some strategy. 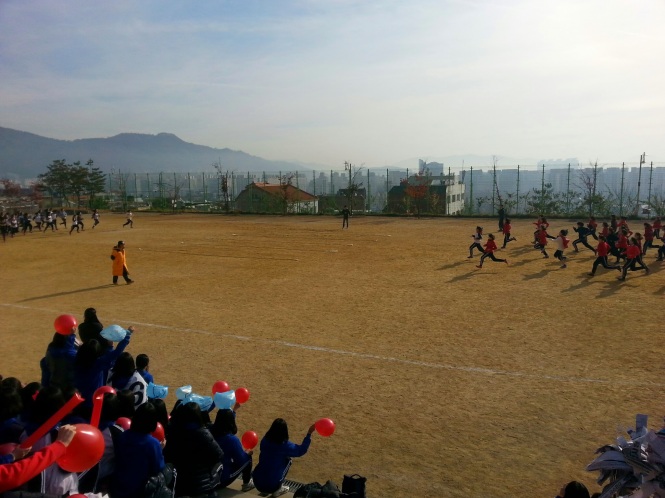 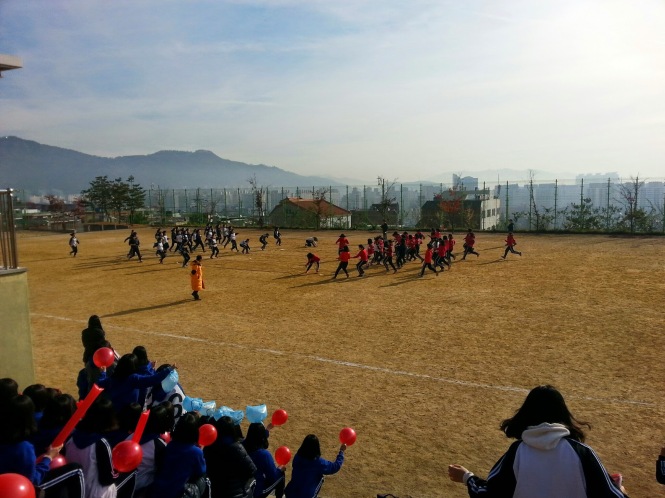 While these games were all fun to watch, the most unique round was between two third grade girl classes. At this point in the school year, after the Suneung, third graders have a who-cares kind of attitude. It’s senioritis to the extreme, and justified, because nothing they do for the rest of the school year actually matters. (Apparently their grades don’t either, because universities don’t ask for final semester grades.) So two teams decided to collaborate beforehand. I’m sure it also had something to do with girls not wanting to get sweaty or their hands dirty. Upon hearing START! the two teams walked calmly toward the center of the field, one girl at the forefront of each teams. When they met in the middle these “leaders” did rock, paper, scissors to decide upon a winner, and that team then dragged the ropes to their side. There was grumbling and disappointment in the audience, though some were also impressed.

Next, rather than a three legged race, students did a four-legged race with three students to a team. Of course, it was a class competition, so they ran it relay style.

Finally, the biggest event was the obstacle course, which dragged teachers into the mix. Students began by running to a line, where they chose a piece of paper with a teacher’s name on it. They then had to find that teacher and begin the course. First the student-teacher pair had to do sommersaults, then hug to pop a balloon (coated with flour) between their bodies. For the next stretch, the student had to run in flippers, which was always amusing. Finally the pair had to try a mystery drink, which could be anything from soda to fish sauce, and run to the end. I ran it twice. As did many of the teachers who were actually around at that time. A lot of slacker teachers just stayed in their offices.

Throughout the day, I mostly hung around with the native Chinese teacher and took pictures *cough cough* selfies *cough* with students. We chatted, cheered and shared food. It wasn’t quite as exciting for other teachers, or they had homeroom responsibilities, but I floated around and spoke with some teachers I normally don’t see. A bonus was shocking/impressing many of them with my Korean. Hehehe. 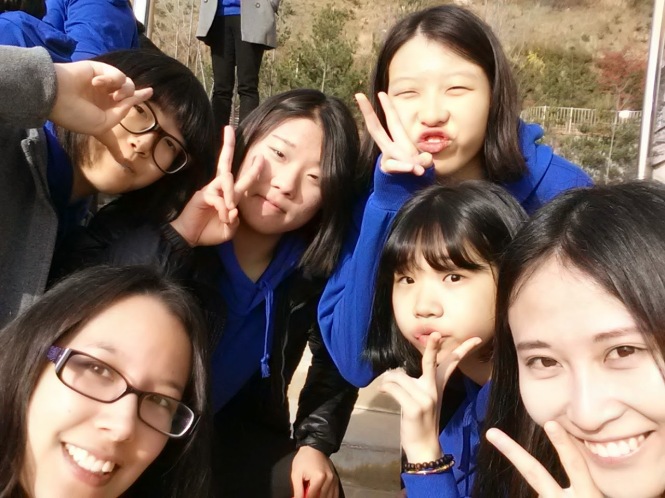 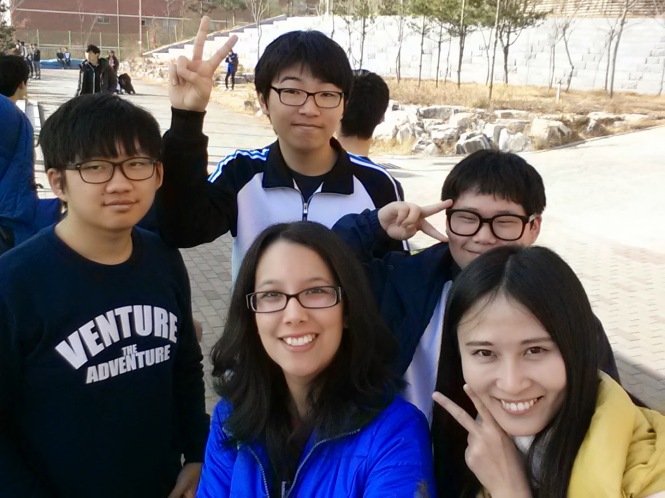 By the time we had the closing ceremony, I realized how tired it had made me to be outside the whole day, having taken only a few breaks inside, plus lunch. But it was really fun and one of the few times I got to spend time with students outside of class and maybe actually get to know them.

Plus I got a lot of selca stick practice. 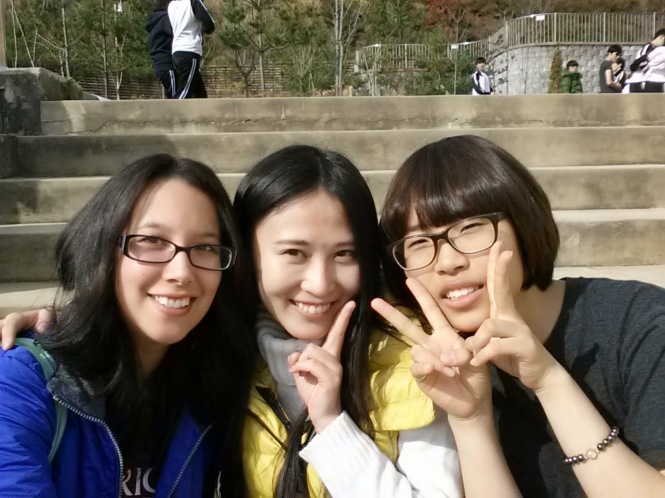 What I Write About

Plein-air pen and wash on paper

A Post-Grad's Journey to Live, to Love and to Travel

There and Back Again

An (almost) Asian's tale from visits to the homeland as a Fulbright scholar/study abroad student. (The views expressed in this blog do not reflect the views of Fulbright, Fulbright Korea, KAEC, or the ETA Program. They belong solely to me and don't you dare try to steal them.)